The governance token of the Axie Infinity platform, AXS, has doubled in price since Wednesday.

As of Friday the AXS token was trading at a new all-time high price of $30, implying a year-to-date gain of over 5,700%.

Axie Infinity is a blockchain-based trading and battling game that allows players to collect, breed, raise, battle and trade token-based creatures known as “axies,” which are digitized as their own non-fungible tokens (NFT).

According to research from TheTie, Axie Infinity has quickly become one of the highest-revenue projects on the Ethereum blockchain. Axie Infinity’s revenue is up over 17,000% since April 1 as user growth accelerated dramatically during the second quarter.

Subscribe to The Node, our daily report on top news and ideas in crypto.

According to research boutique firm Delphi Digital, Axie Infinity is projected to end the year with total revenue of over $1 billion. (Delphi has disclosed that it has invested in the AXS tokens and that some members of its team might also hold AXS and Axie NFTs.) 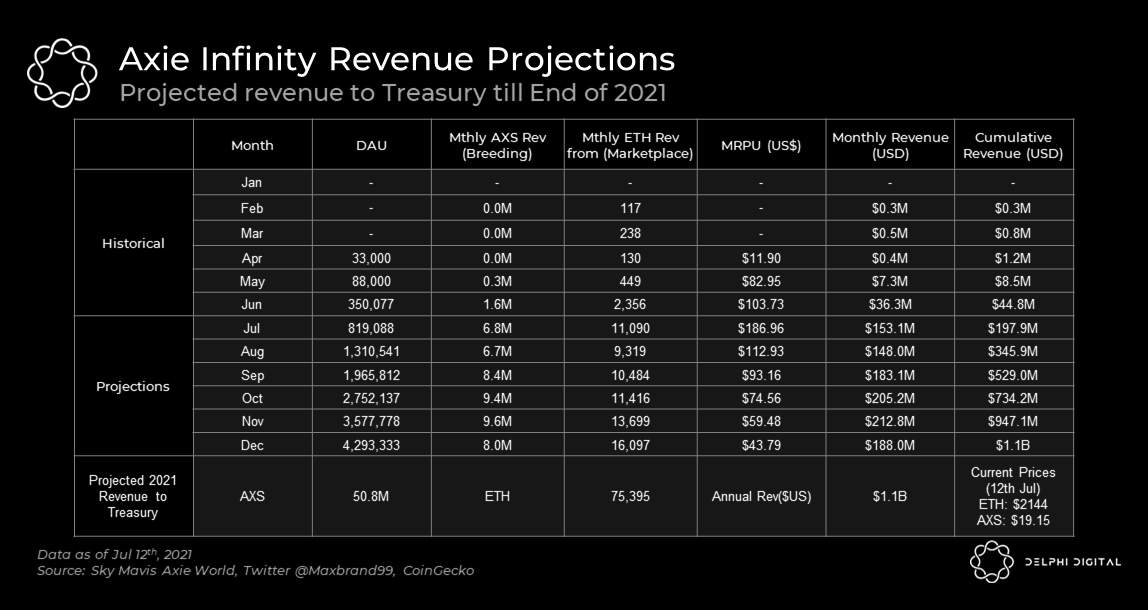 The protocol earns revenue by charging a 4.25% fee when players buy and sell Axie NFTs in its marketplace and collecting fees for breeding axies to create new ones. The fees are paid in the form of axie infinity shards (AXS) and smooth love potion (SLP).

While AXS is the governance token, SLP is the uncapped utility token used to breed new axies. “Each time users breed an axie, SLP is consumed,” DappRadar noted. Both tokens can be exchanged for fiat or other cryptocurrencies. This is how gamers based in the Philippines, Venezuela and other developing economies have been earning income via the play-to-earn economy.

Per TheTie, the game is helping Philippines-based users to earn $50 per day. That’s 66% more than the average wage of $30 per day

“It is impressive how ‘hot’ AXS has managed to remain,” said Denis Vinokourov, head of research at Synergia Capital, in an email with CoinDesk.

The AXS token has a market capitalization of  $1.85 billion. The market value of the NFT-gaming segment is $4.78 billion, or just 10% of the market cap of the decentralized finance sector, per data source Messari.

Of course there are ample risks from holding the AXS tokens in a volatile, still-infant industry where new protocols can be prone to technological glitches and subject to attacks. There’s also the chance that money may rotate into bitcoin and other top cryptocurrencies once bullishness returns to the broader crypto market. At present, the wider market is in stasis with bitcoin locked in the range of $30,000 to $40,000.

CryptocurrenciesVideo GamesCryptocurrency MarketsAxieAxie Infinity
Disclosure
The leader in news and information on cryptocurrency, digital assets and the future of money, CoinDesk is a media outlet that strives for the highest journalistic standards and abides by a strict set of editorial policies. CoinDesk is an independent operating subsidiary of Digital Currency Group, which invests in cryptocurrencies and blockchain startups.